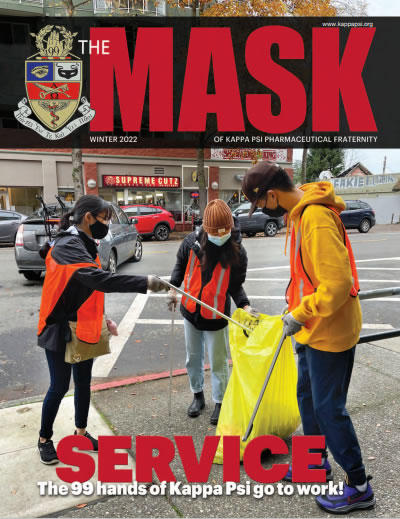 The first official journal of Kappa Psi Fraternity was published in 1904 under the name, The Mask. The unusual name, The Mask, owes its selection to the historic association with the first membership badge or pin which occurred in the form of a domino or half-mask. The name was suggested by Preston W. Eldridge, Editor of the first issue in January 1904.

During the first two years in 1904 and 1905, six numbers of The Mask were published each year. In 1906, four numbers were published, and The Mask has been published on a quarterly basis since that time, except for 1970 and 1971 when only three issues were published. Those who have served as Editor of The Mask since it was founded deserve the gratitude of the entire fraternity. It was their loyalty and personal sacrifice that created and maintained The Mask as one of the Fraternity’s most valuable assets.

You may use the search bar to the right to look up specific words and phrases, and each PDF version of the magazine is searchable. Please note, our search feature pulls every issue that contains the word you search, and may not contain the exact context you are looking for. Enjoy utilizing this resource.